This is a very common practice here in the US by hobbyists, especially those that winter-out their Goldfish. They have a separate tank and then through a sump add some of the BCB’s to the sump and walla, instant filter ready to go far wintering-out your pets with no cycling time involved.

Answer taken from a Koi forum by Manky S.

Thanks for the opportunity to use my favorite expression "the dimorphic metabolism of facultative chemo-litho-autotrophs” (1) and this time it's actually relevant rather than being crowbarred in just to show off!!

Anyway, if I understand correctly you are planning to avoid the bugs in the baskets from going dormant over winter in an anoxic pond by transferring some of the baskets to a heated grow-on-tank. [Ed: This is a very common practice here in the US by hobbyists, especially those that winter-out their Goldfish. They have a separate tank and then through a sump add some of the BCB’s to the sump and walla, instant filter ready to go far wintering-out your pets with no cycling time involved.]

If that's so then no problem (ish).

The bugs in the baskets are just like the biofilter bugs that we are used to. Their activity is very much controlled by their ambient temperature so, as the water temperature falls, they use less of whatever nutrients they rely on.

Transferring them from water that is beginning to go cold into water that will be kept warm over winter will allow them to stay active so the idea will be successful (ish).

Their metabolism and respiration is as described above and means that there are two points to take into account.

"Facultative anaerobic" means that they prefer to use oxygen when it's available but switch to stealing oxygen from nitrate (or phosphate) when the level of oxygen in their environment falls to about 1 mg/L to 2 mg/L. Also their metabolism is "dimorphic" which means that it has two distinct phases i.e. it switches from one nutrient to another.

When you first submerge a basket in pond water, aerated water floods in. After a time bug respiration will have used enough oxygen so that the level will have fallen to around 1 mg/L to 2 mg/L. It won't go any lower because that's when the bugs switch to obtaining oxygen from nitrate so the oxygen level in the basket will permanently stay at that level.

So far so good! Now we have them doing what we want them to.

If you take a matured basket out of water, the oxygen-depleted water in it will drain out. Then when you put the basket back, aerated water will flood in and the anoxic environment will be gone.

I don't want to overstate the case because the anoxic situation will return but their facultative thingy will be interrupted until it does. So if you mess around with the baskets too often there will be more interruptions than normal activity.

So that's where some understanding comes in, I don't see any problem making this change over from unheated to heated and back again once a year just as long as you remember what will be happening each time you do.

(1) [Ed: Chemoautotrophic is a bacterium that derives its energy from the oxidation of inorganic compounds.]
Posted by Unknown at 9:19 AM No comments: Links to this post

Not all ponds are ponds that have Koi in them.

Not all ponds are ponds that have Koi in them. Some pond owners only have Goldfish ponds, and in some ways I can’t blame them. Koi are very expensive compared to Goldfish, like the Comet Goldfish for example is very cheep costing only a few cents apiece. They make great pond fish and can live 15-years or long under ideal pond conditions. They will not outgrow their surroundings if overfeed and filtration can be more simplified if one wishes. However, don’t be fooled into believing they are an easy fish to take care of, they are not. They can gain quit a lot of body mass for their size and still need good water quality because of their waste. Anoxic Filters make the best filters for Goldfish ponds.

They can usually be placed with plants like Water Lilies because they will not uproot the plants like Koi will. Their smaller size of only growing to a foot or a little bigger makes them perfect for smaller ponds. They come in a variety of bright colors but Yellow with Redheads is the most desirable of all the Goldfishes color combinations. Some the neatest Goldfish for ponds are in my opinions the Jikin’s. Not a cheep fish but a very different Goldfish that adds interest to anyone’s pond even when looking at them from above. 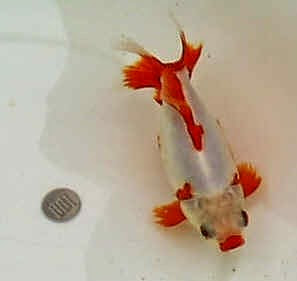 QUOTE from a Koi forum: “I have anoxic baskets in my goldfish/lily pond and am very pleased with it - seems to have dealt with my nitrate and blanket weed issue. Not sure about the protein scum though - for me this tends to be an issue later in the year.”

Posted by Unknown at 12:25 PM No comments: Links to this post

Brian’s Anoxic MKII is done and up and running…

Well here it is; Brian’s MKII Anoxic Filter is up and running. It cost £105.oo for the black pond coating to paint the inside of the Anoxic Filter and the total cost for the new filter is about £450.oo. Here in the US or should I say the upper Midwest, painting the inside of an Anoxic Filter like Brian did may not be a good idea do to the bitter cold weather we have. I think more investigation on the pond sealant would be in order to see if it could stand up to the cold without cracking. A 40-mil Butyl liner on the other hand will expand and contract enough to prevent such cracking. After all they use the stuff on roofs.

So what do you get for this kind of money in an Anoxic Filter verses a filter out of the box? An Anoxic Filter this big at a 50% increased in capacity than his old Anoxic Filter had is a big jump in size. It would take at least three Nexus 300 filter to equal this one Anoxic Filter. That would be a whopping  $ 15,000.oo USD in comparison spending to equal this Anoxic Filter. Über expensive yes, but only for the hobbyist that has the money for such equipment will take that path. Most hobbyists will only add one Nexus filter and realize in the end that they need more filtration as time goes on. That is why I have always said I have never seen a Nexus filter as a stand-alone filtration system for a pond without a supplement filtration system added to it.

The filter has the capability to have 12,000-15,000 gph of water pumped through it. If you can afford the electricity to run such high volume pumps then the Anoxic Filter can deal with that kind of water volume. A Nexus 300 has the capacity to handle about 3600 gph of water pumped through it so it would take about three of them to equal that kind of water turnover. The working capacity of an Anoxic Filter this big and three Nexus 300 filters is about identical but as for as cost goes there is no caparison. There is no way you could get three Nexus filters for £450.oo completely installed. As far as bacteria capacity the Anoxic filter wins hands down. There is no substitution for cubic inches of media.

Thanks Brian for your informative pictorial history of your MKII Anoxic Filtration build. 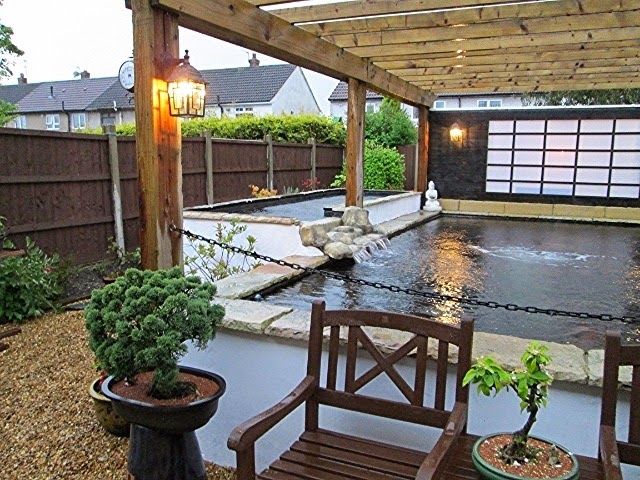 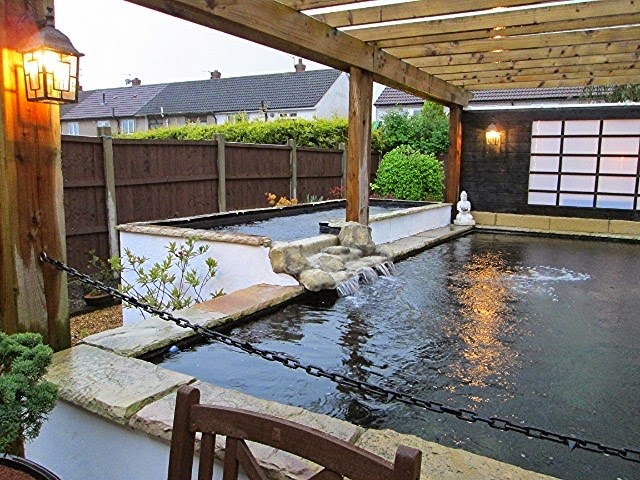 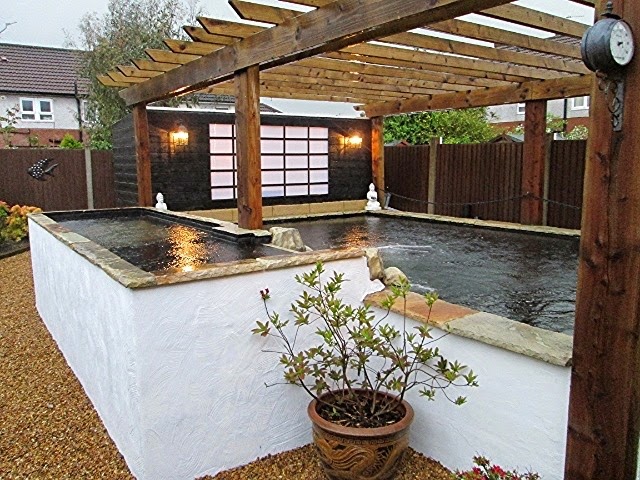 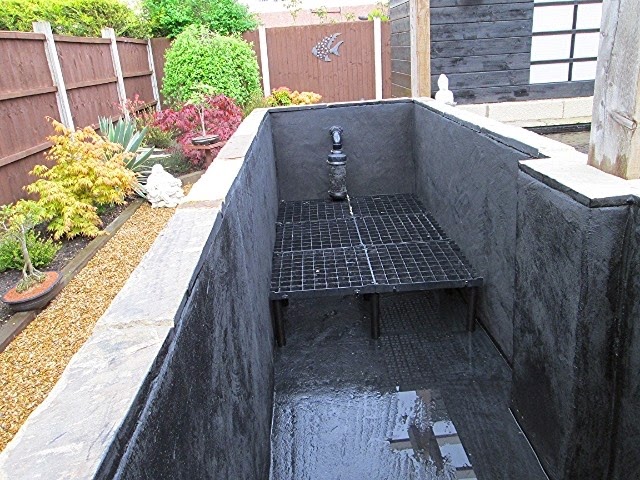 Posted by Unknown at 10:11 PM No comments: Links to this post

It was brought to my attention that Brian Woodcock’s AFS looked a little big and why does the Anoxic Filter have to be so big compared to other filters that are now getting smaller?

It was brought to my attention that Brian Woodcock’s AFS looked a little big and why does the Anoxic Filter have to be so big compared to other filters that are now getting smaller?

Today our unparalleled nature is sublimely programmed from the very beginning by pond magazines from the start of our pond build; that today’s filters are better, leaner and more capable than filters of long ago. However, one of the biggest complaints from hobbyist is that the filter they bought was not up to par like the advertising stated.

Koi grow big and can eat as much as you through at them: Just read the link below.
http://anoxicfiltrationsystem.blogspot.com/2014/12/just-my-two-cents-worth.html

A friend once said: “There is no substitution for cubic inches when it come to horsepower in combustible engines.” This also applies to filters for ponds too. No matter how much technology advances in the filtration world, there is still no substitution as far as the microbial world goes for bacteria living space.  It doesn’t matter how much oxygen the water is saturated with, if foodstuff and substrate are not in equilibrium with each other, then you have an inadequate filtration system for your needs. You either cut back on the food the fish or both but you can’t have it all.

This is the reason hobbyist get so frustrated with ponding because their expiations of what they paid good money for is not what was advertised. Before long it’s back to the store to buy more filtration or live with what you have and the filters shortcomings.
I think if I remember correctly Brian said he has only invested about £105.oo into his new AFS for the black pond coating. Quote from Brian: “ The finish is great and I hate to say it but as good as fiber glassing, whether it lasts only time will tell, but at £105.oo for the whole Anoxic it was by far the least expensive option.” All I know is here in the US, an out of the box filtration system that would equal a AFS like the one Brian has just built in the UK would cost about $5000-7000 USD easily. If you think you could buy better for less, then you believe that you really have a chance at winning the lottery don’t you?

Filtration systems are made small because that’s what consumers want but don’t realize what they need. I show some pictures in my blog and AFS book of some very big filters for ponds because that is what is needed if you wish to have nice big Koi. Don’t become your own worst enemy and think that you can get by with less; you will regret it in the end. In the filtration world, bigger is really better. In this case, you just can’t have too much filtration if Koi are on your agenda. 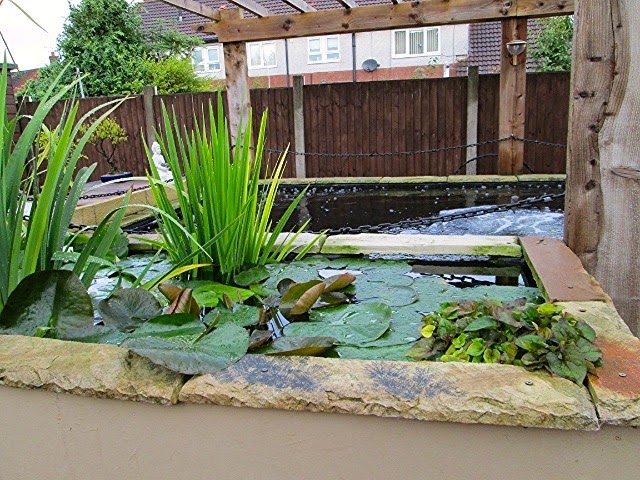 Curse you is all I have to say!

Having spent weeks of effort last autumn/winter installing my Cloverleaf filters etc. I am now totally in awe of what you have achieved and the brilliance (yet simplicity) of the anoxic system.

I am now looking at my entire set-up and all I can see is demolition and replacement...and you are to blame!”

Posted by Unknown at 6:51 PM No comments: Links to this post