Part 3: No plant fertilizer tabs are to ever be used in a Biocenosis Basket ever!

If you were wondering why you should not use any nitrogen tablets in the Biocenosis basket, it is because plants must get their nitrates into their cells against an electrical gradient. Plants, algae, and all photosynthesizing organisms use the N (NH3 and NH4+) of ammonium, not nitrates, to produce their proteins. Using nitrates is costly to the plant in terms of both electrons (e-) and energy. Because NH3 is a small molecule (NH3 ammonia enters plants even more easily than NH4+ ammonium) without an electrical charge, it freely diffuses back and forth across the cell membrane barrier.

The energy required is so substantial for the plant that nitrates are only taken up in the daylight (during photosynthesis) whereas considerable ammonium uptake will continue in the dark, all night long, long after photosynthesis has stopped. The fact is, or pond plants do not begin the process of photosynthesis, until the sun begins to rise. However, it is not unusual for plants to begin photosynthesis until as late as 11:00a.m. only for this process to peak around 2:00p.m. in the afternoon, then slowdown at sunset. After the process of photosynthesis can no longer take place, the plants will begin to generate carbon dioxide instead of oxygen. The plants do not have as much time to deal with excessive nitrates in solution, as you would think.

The energy used represents about one-fourth of the energy required for the plant to produce its carbohydrates. Photosynthesis is reduced by one-third in the conversion of each nitrate to ammonium, in a two–step process of nitrate reduction; the plant for increase growth and flowering could use this energy. The fact is none of our aquatic plants needs nitrates as a food source only ammonium, and there are only a few exceptions to this rule, one is Eichornia Crassipes (Water Hyacinth), with 75 percent of its food source being nitrogen and 25 percent being ammonium. Aquatic plants potted in compost, humus or topsoil endowed with organic matter will certainly grow luxuriantly. However, excess nutrients that leak into solution from such media will lead to the eutrophication or as it's called hypertrophication of the garden/Koi pond. This state of affairs arises from an over supply of plant nutrients in solution that favors the growth of algae at the expense of vascular plants.

Laterite or clay (Kitty litter) has a crystalline structure attracting cations (positive ions like k+, Ca+++, Mg++, Al+++). If other growth factors are present in reasonable amounts, (Note; this is called the Liebig Minimum Law) you will have good root growth. By good root growth, we do not mean many roots. You can have hardy plants with big, thick masses of roots in other systems. What we mean here is root hairs in proliferation filling up a planted pot. The more proliferation of root hairs, the better the plants uptake of cations (positive ion) and anions (negative ion) out of the water body proper. The adsorption and absorption, or in equal equilibrium between anions and cations is very important. If anions where taken into a plant without cations in equivalence, any plant would suffer from a fatal pH swing. Repeatedly it has been observed that the uptake of nitrates from pond containing both ammonium and nitrates only starts after ammonium has been exhausted or its concentrations greatly reduced. 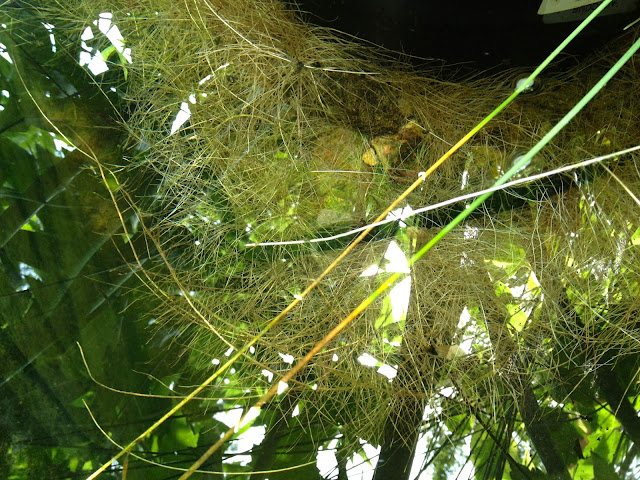 Research has shown that even the type of pots and baskets that are used play a very important part in this filtration system. One of several experiment that were conducted, was to take two different kinds of plant containers, one was a pot you may get at any nursery center with holes only at the bottom of it; the other was the open-cell- plant basket. The pots and baskets where planted up with Acorus Calamus (Sweet Flag). Kitty litter and Laterite were both used as a substrate. The pots and baskets were then submerged into a pond with an oxygen content of no less than 8mg/l. There was to be a grow-out period of four weeks for the plants to become established. After four weeks, the pots and baskets were to be removed from the experimental pond for examination, for their oxygen content, plant growth, root development, and bacteria growth.

It was discovered that the pots that only had the holes at the bottom of them already smelled like hydrogen sulfide. Assimilatory Denitrification by sulfate reducing bacteria and methanogenic bacteria were present, oxygen levels were between .5mg/l- 0mg/l as tested. The open-cell baskets smelled sweet , meaning that there was still oxygen but at low levels (between 1.8mg/l-.5mg/l). The plants in the open-cell baskets were already showing good root growth. The plants in the pots that only had holes at the bottom of them showed very little to no root growth at the time.


Expensive denitrifying media such as Bakki House Media has matured, it will have the same or similar facultative anaerobic bugs in it as in a biocenosis basket?